At the tail-end of last week we completed the basic operating system builds of our new servers, including all of those awkward and pernickety things like the activation process, making sure they’re fully patched and anti-virus enabled. I also presented what felt like thousands of arrays for our soon-to-be-created mailbox databases. OK, so it was only 220 database arrays, ten log arrays and ten restore ones but I’m very glad that scripting came to my aid for creating volumes, formatting disks and creating all of those mount points.

In hardware terms I’ve tried to make a big leap forward in our networking set-up as our racks are so visible: it doesn’t look good for a high-profile service like Nexus to be a bad example in a shared data centre! To try and keep each server’s cabling organised, logical and neat we’ve moved away from our previous system of colour-coding each network cable by function. That approach, while logical, didn’t look as neat as I felt might be possible. So this time I’ve used PatchSee cables with only a different coloured boot clip to identify each function. These cables also have a useful benefit of including a fibre-optic thread running down their length: both ends can be identified by light, without the need to unplug anything.

So our next step is to begin the stress-testing. Today we’ve been running JetStress against the new disk arrays to ensure that their performance matches our expectations. Since this procedure needs to fill the disks almost to capacity we had planned to allow as long as two days. Early indications however suggest that by this time tomorrow it will all be done. This process is an essential step as it will provide the baseline benchmark against which real performance can be compared once Exchange 2010 is installed.

I have one final picture I wanted to post here. It’s actually a couple of weeks old – since it was taken we’ve done all of the cabling and sourced the (mysteriously absent) C19-C20 cables we needed to connect our secondary mains feed into our UPSs to then on to the managed PDU strips. Sadly we won’t need the UPS  kit for very long – our intention is to relocate these servers, post upgrade, into the new university Shared Data Centre  which has two power feeds and centralised UPS provision.

The current live Exchange 2007 service runs on the left-hand pair of racks and the right-hand pair is the new infrastructure for Exchange 2010. You can see each of this site’s five mailbox servers (HP ProLiant DL380 G7s with a pair of six-core processors and 48GB of RAM) with their three disk arrays directly under each server. On the right-hand rack, under the bottom mailbox server’s disks, are this site’s three physical client-access servers (HP ProLiant DL360 G7s with similar processor/memory configuration). The six physical CASs, three per site, will be supplemented by a further six virtual CASs which we intend will host the IMAP service. Hub Transport functions will also be virtualised with six VMs fulfulling that role. The whole installation process kicks off with new CASs – and the first one is now under way… 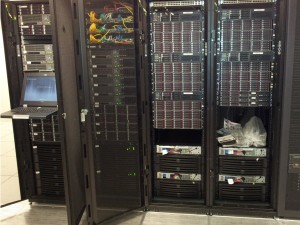 Posted in Uncategorized | Comments Off on It begins!