This month brings us some new hardware which will shortly become our new Threat Management Gateway array. The new servers are all HP’s  Proliant DL380p (Gen8).

The process for setting up new HP servers has recently been updated. They’ve recently integrated their set-up process internally to the server: instead of booting from a SmartStart CD there now is a built-in ‘Intelligent Provisioning’ boot option instead. In fact a Gen8 server refuses to boot from a Smartstart CD any more.

This new Intelligent Provisioning  feature is accessed by pressing F10 at the crucial moment at startup.  For six of our new servers this option was both quick and superbly simple – IP’s options start with a quick config to specify performance options, the ability to update system software as part of the deployment and of course to configure the disks using the Array Configuration Utility (ACU). When accessed

via iLO it also allows an ISO file to be presented as virtual media for the installation, so this was my preferred route to do a deployment. 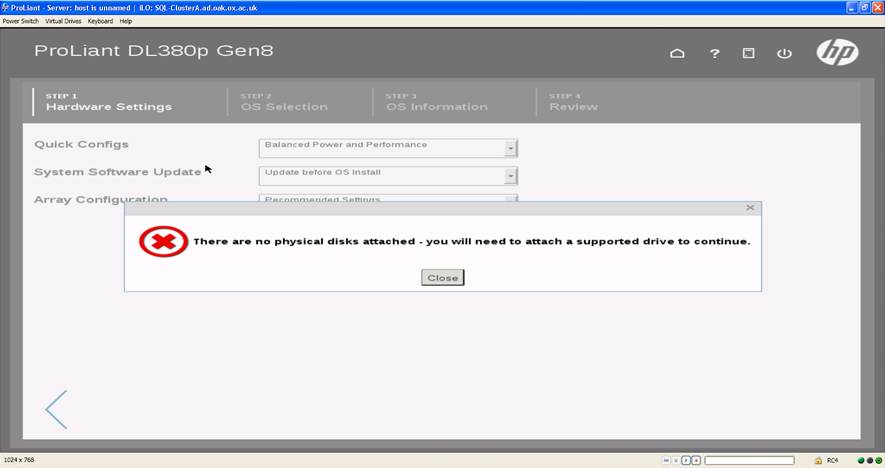 All was well for the first batch of new servers – the array was set to be customised at this first stage, so the ACU launches, lets you configure the disks and then resumes the installation. However this process wasn’t quite so seamless for the last two servers. These two were due to become our new SQL mirror and, initially, all seemed comfortingly familiar.

However beneath these three familiar options the ‘continue’ button had disappeared. And almost immediately an error message appeared on screen:

Now I knew that these disks were there. I’d seen them. And this same error was appearing on two different servers which were installed in two different datacentres. Neither had anything more connected to them at this stage than a power feed and a single network cable for the iLO connection – not even so much as a keyboard and screen. But paranoia had started to set in. It didn’t take long for my diagnostic approach to reach the point where I was thinking about removing the cover from the server to check internal cables and re-seat hot-swappable drives.

But prior to that a quick review of this error on the net seemed to be in order. Search engines weren’t very forthcoming, usually all seemingly directed at one or more variants of the same PDF (it suggests that the issue relates to an SD card or an unsupported drive being connected). Neither of these applied in our case.

The fix is surprisingly straightforward however. Rather than request an array configuration as part of the intelligent provisioning process, instead launch the ACU separately. Configure the disks as you wish in advance, and then return to Intelligent Provisioning afterwards. This step seems to bypass whatever disk-hiding glitch was present in the system and setup then resumes as advertised.