It’s been some time since I last wrote about Nexus’ mobile users so here’s some nice fresh statistics to see what has changed: 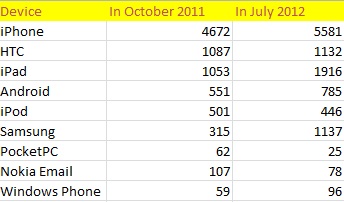 Effectively we have just under a quarter of our users making regular connections via ActiveSync devices. Although Apple have the, er, Lion‘s share and are showing a healthy increase, the gong for greatest percentage increase goes elsewhere: the number of Samsung devices has more than tripled. About half of them are the Galaxy S2 and 43 people are using the Galaxy S3.

It’s also worth noting that the Windows Phone is now starting to appear in respectable numbers and is also showing healthy growth.

And finally, a few other numbers that caught my eye:

Posted in Uncategorized | Comments Off on Mobiles revisited