The Great War Archive extends in to Germany

The RunCoCo team are really excited to finally announce… 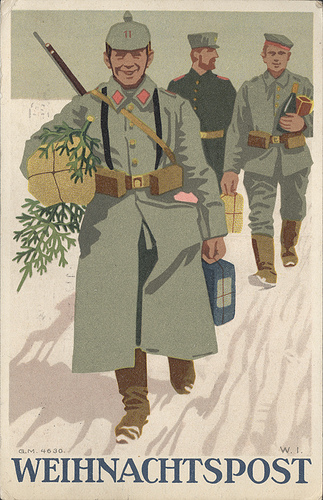 …that in 2011 the Deutsche Nationalbibliothek (the German National Library) and the Europeana Foundation will collect family memories and images from the general public in Germany that relate to the First World War. This is an extension to the University of Oxford’s pilot project, The Great War Archive – part of the First World War Poetry Digital Archive, which was funded by JISC. RunCoCo will manage the project and provide expertise in engaging the DNB’s partners and audience.

RunCoCo is a JISC-funded project which has used the experience with The Great War Archive to coach other projects in crowdsourcing their research, how to engage online with communities and work with user-generated content. This might be getting the public to do work for you, (giving their time and effort – doesn’t have to be boring – projects making games for people to play), or the public commenting and indexing and in other ways adding their knowledge and enthusiasm for a subject, or the public photographing something like a letter written from the trenches in World War 1 and uploading this to a research collection. See RunCoCo’s website and in this blog (e.g. RunCoCo’s crowdsourcing lessons from The Great War Archive or From The Great War Archive to RunCoCo). Third-party services like Flickr have been a main-stay in sustaining interest and contributions to The Great War Archive – and we will use the contacts we have from The Great War Archive Flickr Group to start the online collection in Germany. Indeed the Christmas greetings card (above, image credit) and the lonely hearts ad (bottom of this post, image credit) were from original items digitised and uploaded to that Flickr group.

The German National Library, Oxford University and Europeana have signed an agreement to digitise family papers and memorabilia from the First World War in order to create an online archive about the people involved in the conflict.

Oxford University began the initiative when it asked people across Britain to bring family letters, photographs and keepsakes from the War to be digitised. The success of the idea – which became the Great War Archive – has encouraged Europeana, Europe’s digital archive, library and museum, to bring the German National Library into an alliance with Oxford University to roll out the scheme in Germany. The collaboration will bring German soldiers’ stories online alongside their British counterparts in a 1914-18 archive.

There will be a series of roadshows in libraries around Germany that will invite people to bring documents and artefacts from family members involved in the First World War to be digitised by mobile scanning units, and to tell the stories that go with them. There will also be a website allowing people to submit material online if they are unable to attend the local events. Everything submitted will also be available through Europeana, where it will add a new perspective to collections of First World War material from institutions across Europe. 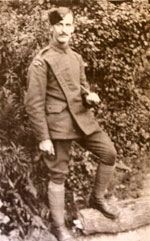 Pictures of Bernard Darley, supplied courtesy of the Great War Archive, University of Oxford, © Merilyn Jones. Click on image to explore the archive.

Dr Elisabeth Niggemann, the German National Librarian, said, “We are proud to be part of this alliance. These artefacts and their stories have survived and we must record them while they are still part of family memory. Little of this material will ever have been on public display, or been made available to historians. What the 1914-18 War demonstrates, especially at the personal level, is the futility of war, and the pity of it for the men and their families.”

Stuart Lee, an Oxford University academic and Director of the Great War Archive said, “Working together with the Deutsche Nationalbibliothek and their partners in Germany to extend this initiative will give it new resonance. The Centenary in 2014 of the first year of the war will prompt many people to discover more about it and find out about family members involved. The 1914-18 archive will bring them close to those who witnessed it at first hand, showing the souvenirs that they kept throughout their lives and telling the stories that they handed down the generations.”

Pictures of matchbox given by Otto Arndt to Bernard Darley, supplied courtesy of the Great War Archive, University of Oxford, © Merilyn Jones. Click on image to explore the archive.

“One such story that was submitted to the Great War Archive during the British project exemplifies what we want to do. It concerns RAF man Bernard Darley who was commended for putting out a fierce fire in a workshop containing petrol tanks. At his side throughout was a German prisoner of war, Otto Arndt. The two became friends and Otto made a matchbox from a shell-casing as a memento which he inscribed and presented to his friend. This story shows the human side of the war – in this case an unlikely friendship between normal people caught up in a war not of their making.”

Jill Cousins, Executive Director of Europeana, says that the organisation is well placed to bring together such partnerships: “Europeana acts as the facilitator in an extensive cross-European network of libraries, museums and archives. We aim to create partnerships with organisations from other theatres of the First World War, such as Belgium, France and the Eastern Front, so their stories can be included.”

“The 1914-18 online archive will reflect the reality of the lives of the soldiery on different sides of the conflict. As a people’s history it will offer a vivid testimony that school students will find compelling, and we are keen to work with educational organisations to create teaching resources. We are also planning exhibitions and information services that provide a pan-European focus on activities around the 1914-18 centenary.” 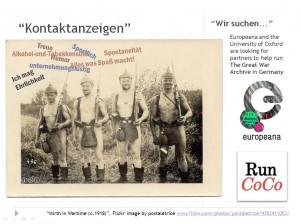 Lonely hearts advert created from an original photo in the The Great War Archive Flickr Group (Some rights reserved), Click on image to see larger version.

5 Responses to “The Great War Archive extends in to Germany”