On August 23 1989, a 600 kilometer long human chain was created by people joining hands across the three Baltic republics Estonia, Latvia and Lithuania, then part of the Soviet Union. Now, in preparation of the 25th anniversary, an initiative is underway to re-create the chain in digital form. 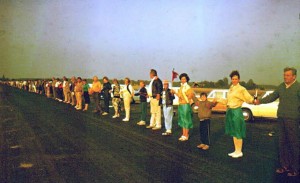 The Baltic Way, also called the Baltic Chain, was formed on the 50th anniversary of the Molotov-Ribbentrop Pact which had divided Eastern Europe into the spheres of German and Soviet influence and led to the occupation of the three Baltic States in 1940. It is estimated that up to two million people linked hands in this peaceful demonstration, demanding recognition of the secret clauses in the Molotov-Ribbentrop pact and the re-establishment of the independence of the Baltic States. The chain stretched through three Soviet republics, from Tallinn in the north to Vilnius in the south, going through Latvia and its capital Riga – a distance of over 600 kilometres.

August 23 has become an official remembrance day both in the Baltic countries, in the European Union and in other countries, known as the Black Ribbon Day or as the European Day of Remembrance for Victims of Stalinism and Nazism.

In the lead-up to the 25th anniversary 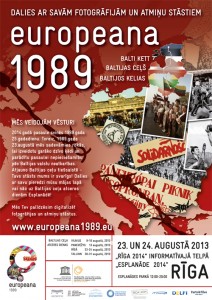 of the Baltic Way, Europeana – Europe’s digital library, museum and archive – is inviting people to relive the Baltic Chain digitally. People who took part in the original event, or who have pictures, stories or recordings from it, are asked to add their stories and material to the Europeana 1989 website where it will be displayed on a map of the original route. The stories, pictures, audio and video recordings will be available to anyone online, and offer an unrivalled opportunity to remember or see what it was like on that August evening.

A series of public collection events are also being held to assist with the collection and digitisation of stories and memorabilia. People are welcome to bring their material to one of these event where project staff will digitise the objects and add the stories to the website following the model and procedures of the Oxford Community Collection Model. 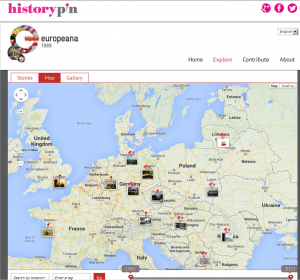 The Europeana 1989 website, using HistoryPin to display the contributions

The digital Baltic Way is part of Europeana 1989, an international project collecting stories, pictures, films and other items relating to the events of 1989 in Central and Eastern Europe. The project is managed by Europeana, using the Oxford Community Collection Model.

Europeana 1989 is collaborating with HistoryPin, using their method for adding and displaying pictures on a map. Contributors  ‘pin’ their contribution to a map and the map can be explored by anyone who wants to see the pictures and read the stories. The Europeana 1989 collection, including the Baltic Way material, can also be viewed in other ways through the project website http://europeana1989.eu/.

Posted in digitisation & ugc, project news | Comments Off on The Baltic Way