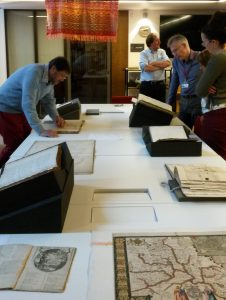 The workshop concluded with a visit to the Special Collection in the Bodleian Library, where participants had a chance to explore some remarkable Early Modern material

RunCoCo staff have just returned from a very engaging and stimulating workshop where participants met to develop ideas for a collaborative project involving local historians and record offices in academic research.

The workshop, organised by Abigail Williams and Jonathan Healey, is the first step towards creating and running a major project which will combine the skills, experiences and efforts of different types of participants. Questions that were discussed included what such a project would involve, who might participate and what digital components should be considered, amongst other things. It is obvious that non-academic researchers and archives have a lot to offer, and part of the workshop was used to find out more about what kinds of skills, information or benefits they might want to gain and consider how this could be provided. Ideas that came up include skills enhancement workshops (for example palaeography training), talks and events, and opportunities to raise awareness of the local archives. The need for archives and record offices to show that the archive is being used and can generate revenue was recognised as one that cannot be ignored. It was suggested that the opportunity to be part of this kind of collaborative research project would be appreciated, and it was agreed that recognising everyone’s contribution to the project would be important.

As there was general approval of the idea to run this kind of project, the project team will now go on to draw up a proposal for a pilot phase. This will include working more closely with local archives and record offices to identify the type of material to work on, and to define the research questions to address. It is presumed that the discussions started in the workshop will continue, and thereby influence the development of the project proposal.