We have been pondering the idea of disabling 802.11b for some time. Research into the subject has proved that it will be feasible.

What’s the difference?
802.11b was the first standard of wireless networking conceived by IEEE in 1999. It’s been a game changer and led to ubiquity of mobile devices. As happens in the technology industry, it became obsolete before long and complemented by its successor – 802.11g. Apart from the increase in speed, the two standards differ in how data, management and control traffic is implemented. 802.11b uses Direct-Sequence Spread Spectrum (DSSS) modulation technique, whereas its successor (along with 802.11a) uses Orthogonal Frequency-Division Multiplexing (OFDM) for encoding digital data. Despite both standards operating in the same frequency of 2.4GHz, different modulation standards are used. Backwards compatibility with the older standard was achieved in 802.11g in the form of using additional steps whilst talking to “b” clients on a “g” network. The mechanism used to facilitate this compatibility is called RTS/CTS (Request to Send/Clear to Send) and is responsible for reducing frame collisions. Such “protection” against legacy clients has a drawback in the form of reduced throughput (as it involves more control plane frames).
The other notable difference lies in security. 802.11b devices don’t support AES encryption and often have driver-related issues with support for enterprise security (802.1X). 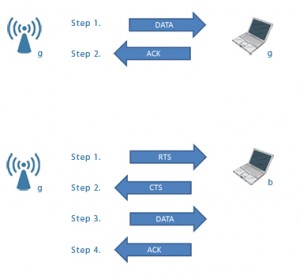 What’s the plan?
We plan to disable 802.11b compatibility on the centrally managed wireless service (OWLv2) on July 31. This will hopefully give you and your customers plenty of time to prepare for the change.

What’s the impact?
We monitored the client protocol distribution over past weeks and the number of clients connecting with the old standard was marginal – we recorded the average of 3 devices out of roughly 3700 connecting through wireless b. This makes us believe that the benefit of disabling the ‘b’ standard outweighs the need for legacy support. 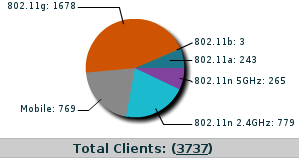