Upgrading desktops with 4GB of RAM

It’s good news for anyone using our desktops with only 4GB of RAM. Hot off the back of our annual PC replacement cycle, over the next three weeks (15th February – 4th March) we’ll upgrading all of our desktop machines so that they have a minimum of 8GB of RAM. This is over 1000 machines spread across at least 34 buildings, totalling over 30kg of additional RAM modules to be installed!

We’re still finalising the plan but we will be attacking large buildings such as University Offices and Dartington House after work, between 5 and 7pm. This is to help minimize the interruption to staff and allow us to quickly complete as many as possible. With the smaller buildings we’ll be asking you for help in confirming access arrangements and the timings. We’re part of the way through contacting individuals that are using machines due to be upgraded so if you think you have a machine with 4GB we should be emailing you within the next week or so.

It should be noted that by no means are we treating this as the resolution for all of the issues that have been reported. However having reviewed the information we’ve gathered so far we can see that a number of machines with 4GB of RAM running at or near their memory capacity. As a result a decision was agreed to get all existing machines up to our current standard of 8GB.

To quickly check the memory your machine has Start button

and open Computer from the right hand menu. Along the bottom of the new window that has opened will be listed your PC name and the amount of memory that is installed. In the screenshot below this is OUIT-D004462UST and 8GB respectively. 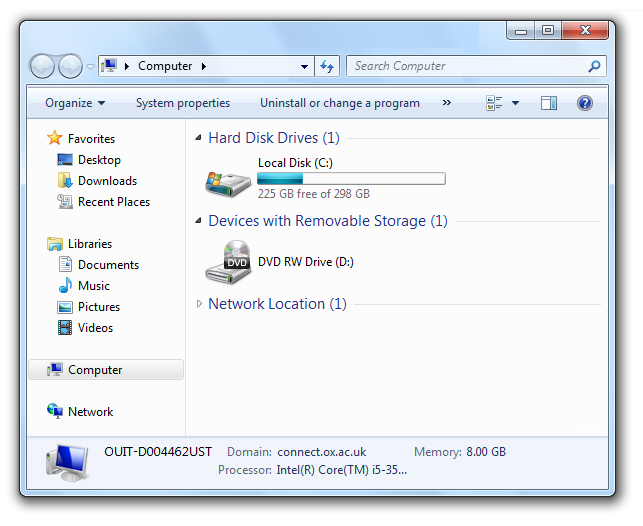