A lot of support calls, especially associated with the slowness problems, surround slow logon and boot times. These range from unable to logon to delays and error messages at a range of points during people getting to the point where they can work. A lot happens in the background to get a machine to the point that you can use it and I’ll post a more detailed explanation of what happens when I get a chance.

Essentially from a support and troubleshooting perspective we can divide incidents into three categories which cover all aspects of the reports we get:

I’m sure if you google PC start or logon you’ll get as many different ways of defining these as you click results. However, for simplicity we’ll stick to the above three. 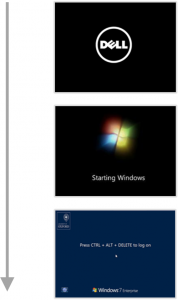 This covers the initial startup of the machine through to the point where you can enter your username and password to logon. Typical issues that occur during this phase are:

The only times machines will fail at this point is when something has changed. So for example a faulty RAM module could cause the machine not to boot past the BIOS Post checks (happening when the Dell logo is being displayed) and an application being installed or updated could cause Windows to fail to load, resulting in an error message or ‘blue screen of death’ (a lot less common these days!) happening after the ‘Starting Windows’ screen.

This covers the process of your logon to the machine to the point that Windows is ready to use. This phase is one of the primary areas that we are focusing on improving, with the planned changes to the printing policies directly affecting this phase (see our previous blog post about it). Again, errors that we see here can generally be split up into one of the following:

The first of these is pretty obvious. If you enter a wrong username or password you’re not going to get any further.

Did you know we have systems in place to allow you to reset and unlock your own accounts? Information is on the IT Services Help website.

Similar to booting up, any errors that occur here are normally as a result of something that has changed. For example, we have this extremely rarely, but a user’s roaming profile could get itself into a state where the server side copy is corrupt, meaning Windows is unable to copy it back down to the machine during logon. Similarly Sophos antivirus, which loads on start-up, could fail to run correctly either because of an update or a dependency has failed.

It’s probably worth noting that whilst we are looking to trying to improve the user logon this is just looking at decreasing the time it takes rather than fixing an actual problem. Everything happening during the logon phase is working, just some bits of it are taking blooming ages to run through.

A common misconception we have is users considering loading applications as part of the logon process. OK, so a computer is pretty useless once it has loaded until you open up any applications however it is really critical for us that we separate out issues with applications to issues during logon. Behind the scenes the two are completely different with no links between the two. 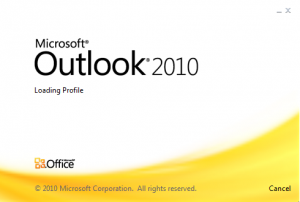 Our primary focus whilst investigating issues has so far deliberately not been looking at individual applications. However we have always planned to come back and review them,with Outlook being by far the number one application that people have issues with. We will shortly be starting to focus effort onto the problems that people are experiencing with it to help identify any issues and problems as well as producing some guides and help information on getting the best out of it.