One of the most common criticisms of our current Exchange 2007 implementation is that Outlook Web Access gives a second-class service to anyone who dares to use a browser other than Internet Explorer. But it’s sometimes hard to know if we have a silent majority, happy to use IE, and that we were only hearing from the ‘squeaky wheels’ who used something else.

Our uncommon set-up, more akin to an ISP than to a typical business installation, puts us in a position where we’re aiming to support the widest possible spectrum of platforms. Mandating a standard isn’t an option and we’ve done our best to offset Exchange 2007’s OWA light limitations with a third-party product called Messageware. As a stopgap, it did the job but was an expensive way to offer not-quite-enough in the way of features.

This means that our upgrade to Exchange 2010 is, unusually, therefore driven primarily by giving our users a better experience. But what were our users using? How many would get the ‘premium’ feel of Outlook Web App and who would be left out in the cold of the ‘light’ version?

Internet Explorer (in all its versions) comprised over 35% of our users, Firefox had 27% and Safari (on a Mac) had an 18% share. If you feel that the ‘…on a Mac’ suffix is unnecessary, bear in mind that we apparently have several thousand people (0.7% of the total) using non-Mac versions of Safari…  My personal favourite browser – Opera – squeezes in with a similar percentage. 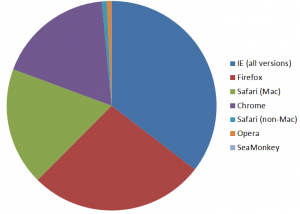 But the all-important question was what proportion of our users would actually benefit from this upgrade. So here’s that pie chart again, with the browsers that can display ‘full OWA’ grouped together: 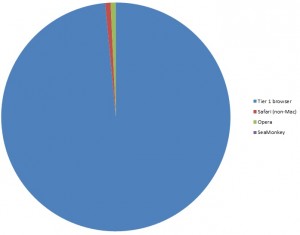 The answer is, reassuringly, pretty much everyone. We should be able to tell our users that 99%  of them will get the full range of OWA features.

For the remainder our data suggests that they often have access to a second browser which offers the full experience.

One final note on the subject of browsers: Exchange 2010 Service Pack 2 is now released, heralding the return of a feature that’s been much missed. For basic devices or where speeds are low and data is expensive, the reintroduction of an ultra-basic version of OWA represents a welcome gain.

We’re still debating SP2’s merits (an early deployment represents added risk during an already busy migration) but we do intend to deploy it, adding ‘Outlook Mobile Access’ as another useful way to access email.

Posted in Uncategorized | Comments Off on Client Browsers