It was July 2012 when I last reported on the University’s mobile users so it seems like a good time to see what’s changed.

Yet another factor to bear in mind is that not all of these devices are mobile ones  – Windows Mail uses ActiveSync but is a feature of Windows 8’s touch interface, widely known as TIFKAM.

As before I’ve not recorded devices which have fewer than twenty users.

That means that nearly a quarter of Nexus users are making regular connections via ActiveSync devices. Apple still dominate but Android is also a significant force. The graph below shows the change over time. 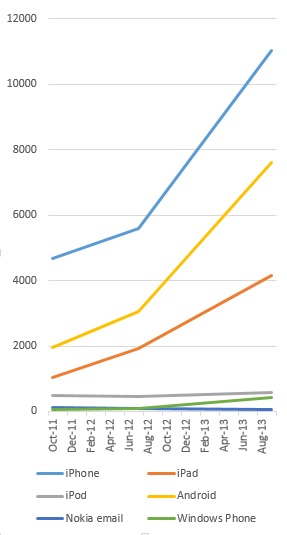 Windows Phone shows the largest percentage increase over the last two years, but behind that impressive growth figure is the rather more down-to-Earth one that they only represent 1.7% of the total. Who knows, another year and Windows Phone could overtake the iPod!

Interestingly BlackBerry’s Playbook has leaped from ten devices last year to 48 today. But the tiny number of BlackBerry phones (even if I were to add those 360 BlackBerries using our BlackBerry Enterprise Server – not listed here) shows that their technology is very much in fourth place behind Windows Phone, Android and Apple.

I will finish off with a few final items which caught my eye – Palm lost two users over the last year and are now in a precarious position, just barely scraping onto the table by maintaining twenty active users.

I’d also like to say a big ‘hello’ to the two people who’ve bought Surface RT tablets in the last year. Maybe they’re the same two people who gave up their Palm devices?  🙂

Posted in Uncategorized | Comments Off on Mobiles re-revisited