If you have ever sent an email only to realise – after sending – that there’s a reason why you shouldn’t have sent it, Microsoft have some good-ish news for you. Message Recall is being updated.

Historically the ‘recall message’ option has only really drawn attention to the problem message, as recipients are prompted to decide if they will permit the message to be recalled unread. Natural curiosity means most click ‘no’ and then search their way through the message for the juicy gossip you’ve sent by mistake.

From November Microsoft are modifying how recall operates. Instead of the historical client-based approach, which is dependent on Outlook being used as the email client, the new behaviour will be for the recall to be processed directly in the cloud, at users’ mailboxes. When an email client synchronises with the cloud, the message can be removed.

This is still not quite the panacea that you might be hoping for, if you’ve ever needed to recall a message however. If the message was read by the recipient already, it can still be recalled but they’ll still have seen the recalled content. Clients can also be configured to reject recall requests.

The unique set-up we have in Oxford also changes things – in most organisations there’s just one email system, but Oxford has some departments running their own service, forwarding content elsewhere, or running a separate Microsoft tenancy. In those situations a message recall has more potential to fail.

Perhaps the most useful feature of this change is that you’ll be able to see an aggregated report of the status/progress of your attempt to recall a message: for whom it succeeded, and for whom it failed. 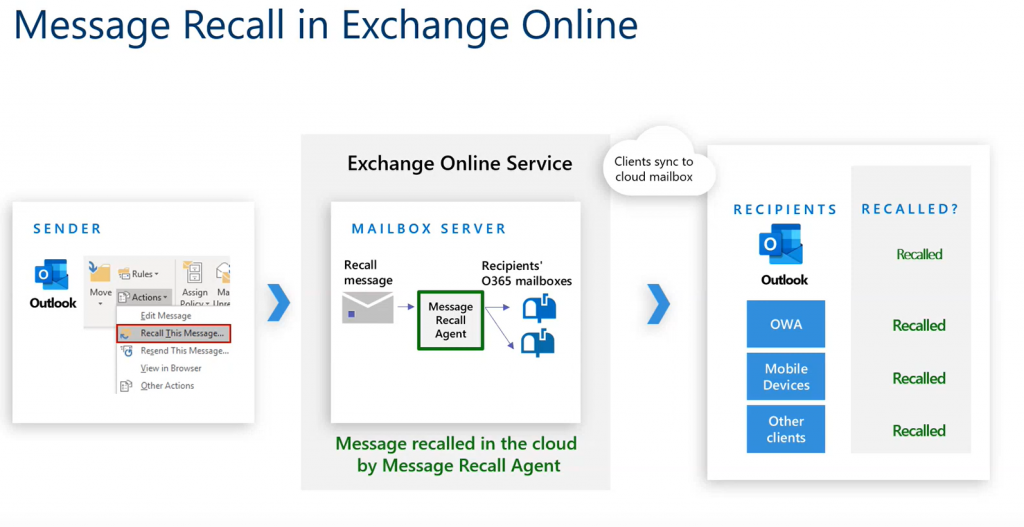 Posted in Uncategorized | Comments Off on Improved Message Recall