The days have been glorious; the force lit the world and provided bounty and delight for all. All things have their time. The evenings have turned to the darkside and enforced merriment pervades the air at Tesco. It can only mean that winter is upon us once again.

As regular readers will remember, it is a long standing tradition that sysdev gets a Lego StarWars advent calendar. This year is no different (and, actually, the first door was opened by Adrian yesterday — more on that later). The rules remain the same, one day, one door, one brave Jedi to do battle with fiddly little pieces of plastic, and one photo of their finished masterpiece appended to this post.

So, onwards to victory …

Adrian’s landing ablationator is first ashore in a heroic rush, but he’s torn between the red-wrapped treat on the right and the orange one on the left. Adrian will learn to pay attention to the road ahead… 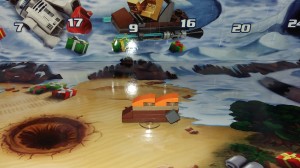 Word reached us that an army of Trandoshan bounty hunters were on the prowl .. and could very well reach Camp Gaderffii within hours .. We quickly readied the  Multi-Projectile OzBlop J-24 and beamed it up to a vantage position with its 4 x ZZ14 Rocket Systems facing 4 possible approach directions 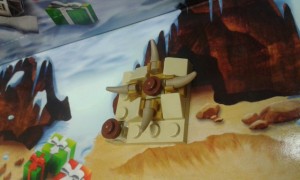 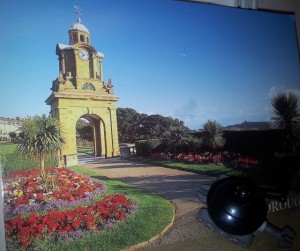 Utini! It looks like the pesky little Jawas have turned up to try and steal all the presents … luckily they haven’t been bought yet! 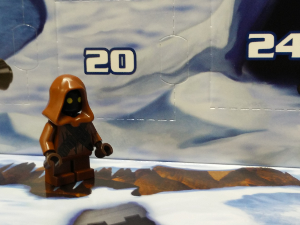 This is not the sand crawler you are looking for… 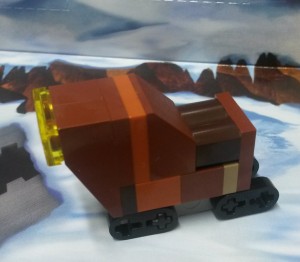 My first Lego Star Wars calendar – ever! I’m told this is probably a Ewok turret of some kind. 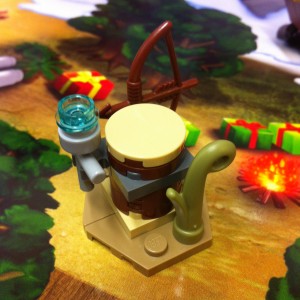 No idea what I have built here, I’m confused but then that’s war for you. Perhaps it will cause the Trandoshan bounty hunters to think on’t.  I’ll tell them it’s a present form Darth Santa and leg it to the Pub, I’m in need of some Dagobah swamp water. 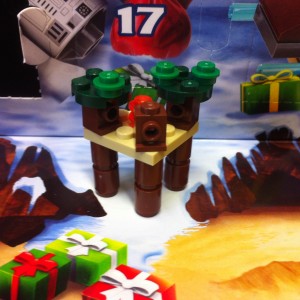 This is an Ewok! The first piece apart from the Jawa that I actually recognise despite having watched all three original films. 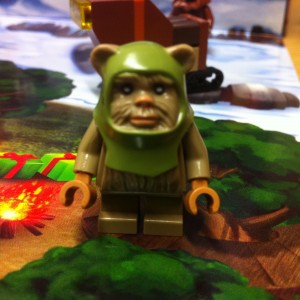 The Ewok is happy now he’s got his boulder catapult loaded. Don’t let those glazed eyes deceive you – he can take out a Stormtrooper’s helmet at 30 Wookiee strides. Once he’s run out of boulders the catapult will make an excellent present delivery mechanism to the tree tops. 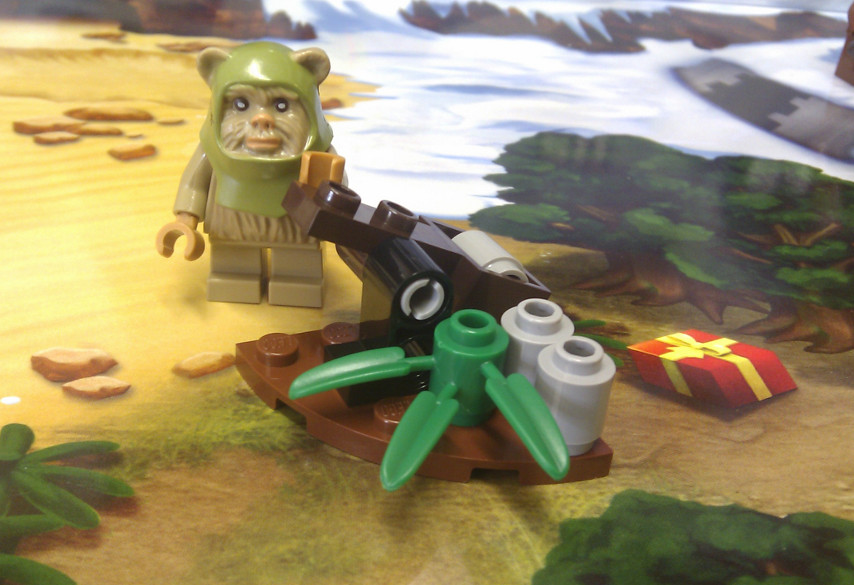 This Stormtrooper seems to have stolen a bow and arrow and is creeping up on an oblivious Ewok. 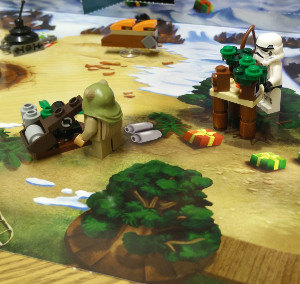 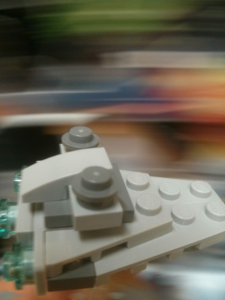 You can never have too many weapons racks… 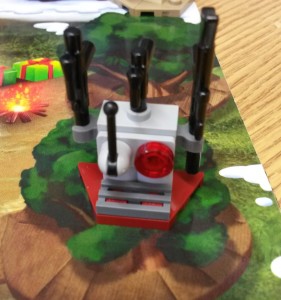 Bender makes a cameo appearance and cannot resist goosing a stormtrooper. “Ooh ooh ooh ooh. Can you feel the Force?”  That stormtrooper soon will. 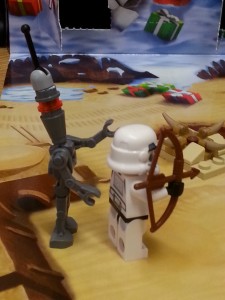 If you look very carefully, you’ll see the millenium vulcan swooping in at 3 parsecs below the speed of light, about to wreak havoc upon the land.
(cameraman: adrian. director, producer and pilot-stuntman: dave).
Hang on, wasn’t vulcan from another story? Dave, I thought you said vulcan! 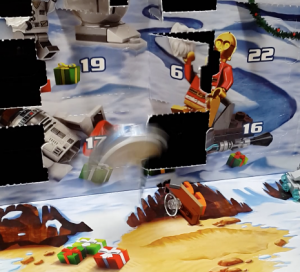 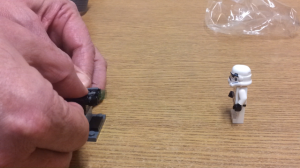 A trigger happy Sleazebaggano on watch duty and sat in a grounded Alderaan Y-Wing Starfighter  blasts out a wrapped xmas present with a proton torpedo when the electronic toy inside makes a squeak .. oops!!! someone will be without a xmas present .. Too right, no more watch duty for Sleazebaggano  .. 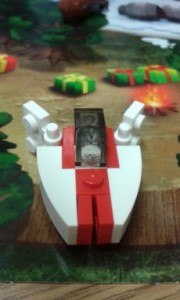 The Hoth Rebel Trooper looks rather bemused at the lack of snow – clearly, Hoth is also having a very mild winter. 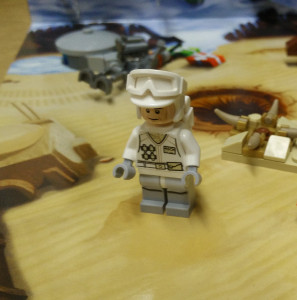 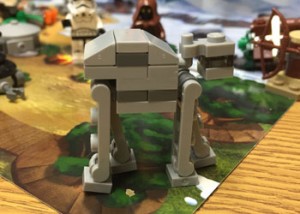 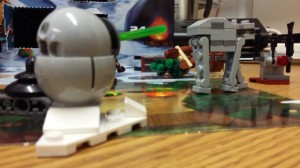 I don’t know what it is but it doesn’t look good.  We need courage, pass the Dagobah swamp water. 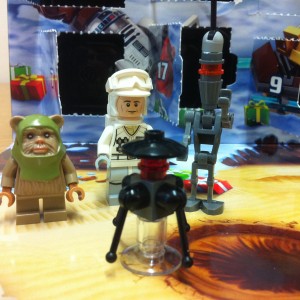 Ah!  That’s better, I think I may ask it if it would care to dance. 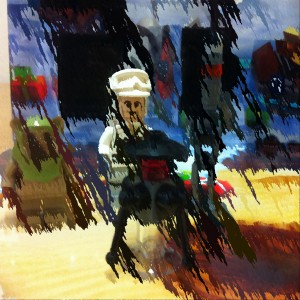 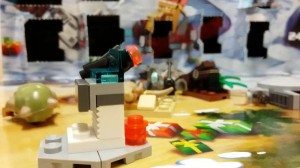 Look carefully and you can just make out the shot being fired off. I should have made an annoying animated GIF instead, I know

R2-Deer2 and his mate turn up late for the party. The Dagobah swamp fumes have livened their circuits and they start a bout of rutting around the Pit (of Carkoon) whilst the Stormtrooper cheers on.

Swoosh! This guy simply HAS to be the droid I’m looking for … Help me R2-Deer2, Vader must be near, I can feel his presents! 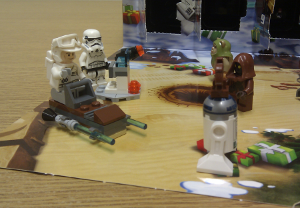 And finally! Santa3P0, with a sack containing a taun-taun of presents, lands at last in his sleigh, pulled by the red-nosed R2Deer2.

(mutters) “It’s against my programming to impersonate Santa Claus”

All the boys and girls wait patiently, keeping Luke warm near the fire.

“Hello, boys and girls, I’m terribly sorry but you’re doomed, the possibility of a child being good all year round is approximately 32,700 to 1.”

“But here are your presents anyway”

(Fade to cheers from the assembled throng) 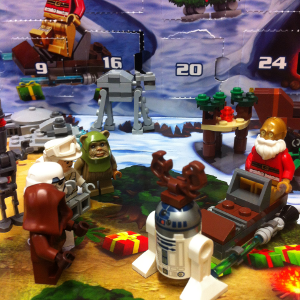