One year after the destruction of the eggnog, a deep chill once again grips the republic.  Frost glitters in the hearts of those who would seek to rule, and the light sabres of the Jedi remain relentlessly dark.  A new resistance is needed, to lead the fight against short days and long, dark nights.

And that is where we, the combined forces of IAM and UPS come in, bringing hope to the galaxy, one door at a time. 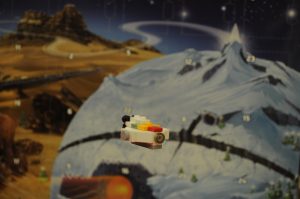 The Ghost drifts silently through  the shadow of a moon, hoping to avoid detection by the enemy, as the rebels gather intelligence ahead of making their first move. 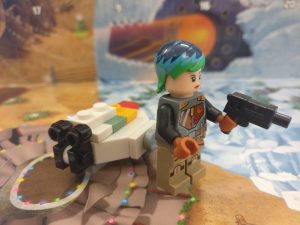 The Ghost gently touches down on the edge of the icy wilderness and Sabine Wren steps out, quickly moving so that the ship is very far away just behind her so as not to break scale. She quietly and confidently rocks her hairstyle while she waits for the Phantom to arrive. 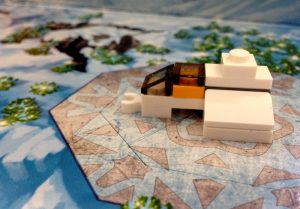 As the Phantom settles gently onto the landing pad accompanied by the familiar hiss of its gas evacuators, the rebel pilot turns to his companion and smiles expansively: “I really love the new Mk III Phantom!”

The co-pilot’s head swivels sharply: “No. This is the Mk II. The Mk III has the chromite turbine fan inlets, and those as you can clearly see are vanadium!”

The pilot’s face colours: “You’re thinking of the limited edition Mk IIa with the carbonite dorsal injector couplers, and anyway the Mk II was subject to export embargoes and was never available for sale in the Galactic rim!”

The co-pilot refuses to yield: “You’re mistaken! The Mk II *was* subject to export embargoes but a small number were sold under license by Aratech Technologies inside the Minos Cluster! Also the Mk III never included the rear shield compensators which, as you can plainly see, are shown on the dashboard readout!”

Desperate to resolve the argument, they simultaneously reach for their datapads – just as the Imperial assassin droid’s missile impacts and reduces both men and their Mk IIb Phantom (neither had noticed the crynex-shielded torque vent beneath the weapon housing or the optional pistol rack mounted behind their head-rests) to their constituent atoms. 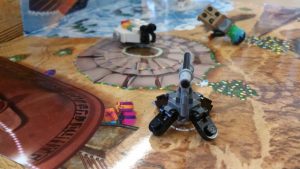 As the blaster cannon plummets to the ground, curiously self-aware, it channeled a bowl of petunias, thinking ‘Oh no, not again!’. Exactly why this thought went through its head is unknown, but it has been speculated that if it was understood the universe would implode.
Upon impact, the cannon fired unexpectedly, injuring Sabine and causing her to dive to the ground for cover. 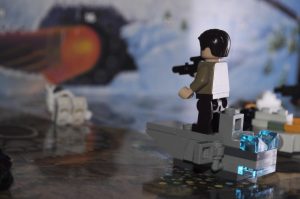 I told the storm trooper it was my ship. 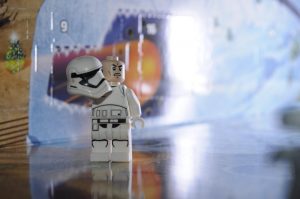 OK lads, very funny,” growled Stormtrooper THX1139.  “Who has been using my helmet as a potty again!?  If I find out who did it … well, I would threaten to shoot them, but you know I always manage to miss anything I’m trying to hit … but they’ll be getting my boot up their thermal exhaust port I can tell you!

“I don’t know, first of all I get stuck on the garbage Compactor maintenance rota all week, and now this.  It’s enough to make me wish I had joined the Rebel Alliance … at least they dont’ have to wear this stupid armour that doesn’t even protect you from an ewok with a catapult!” 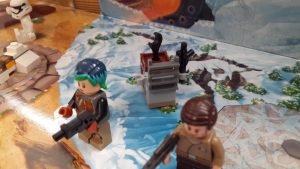 Nobody ever gives us weapons-racks any credit in these sagas. And the cheek of it all, having to carry a wheel-spanner for that stupid mark two thingy in case it gets a flat! 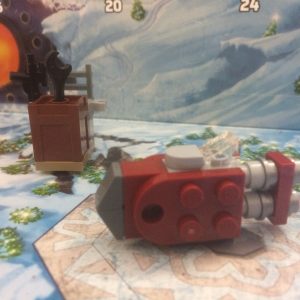 Just look at this beauty.  Rey’s speeder has landed.  Rey has gone down to Diogenes’ Barrel for a hair of the cynic. 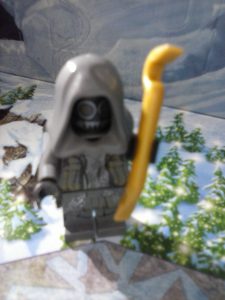 Unkar’s Thug dusted the snow off his lapel as he climbed the peak of The Ice Mountain.  He grimaced, realising that he may never see Niima Outpost again. 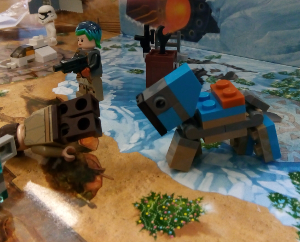 Overexcited as usual, the friendly local luggabeast mistakes Taslin Brace for the postman knocking him clean over in the hunt for presents being delivered… No luck today, but just a few more sleeps to go! 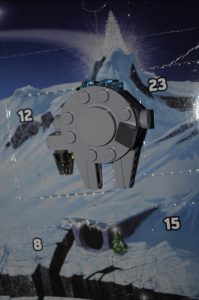 The conditions were treacherously icy, and Han wasn’t looking forward to a hill start in the Falcon. Admiral Akbar pointed out that they were expected to make every reasonable effort to attend for work as normal, so Han begrudgingly fetched his ice gear while muttering about Tauntauns. 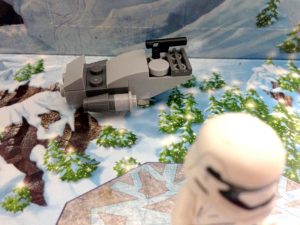 Climbing up the side of the valley, Stormtrooper THX1139 looks back down at the platoon’s First Order Snowspeeder and is surprised how pleasantly the strong lines of the machine contrast with the softly undulating snowmounds sleeping about its base.

He trudges upward, the patient crunch of snow under his boots echoing like the gentle tear of wrapping paper in the hands of an expectant child. Puffs of ethereal mist momentarily envelop his helmet as he steadily breathes in and out. But he journeys on, resolute, and strangely at peace in the revolution of snow.

Glistering in impeachable beauty the sunlight reflects crazily off surrounding ice crystals, beams of light cast from their prismic edges dancing joyfully across his visor. And as he journeys upward, an unfamiliar feeling starts in his breast.

As he tops the rise and looks down on the approaching rebel convoy, a gentle smile tugs at the corners of his mouth. 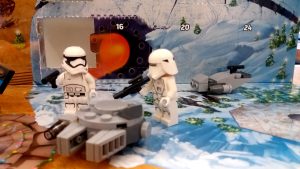 Trevor and Barry from accounts were well known for their tank tops, Casio calculator watches and black shoes with white sock combos.

It had been a strange office Xmas party indeed.    Their annual attempt towards being humorous attaching Mistletoe to their trousers had once again left them shunned into the corner.
“Who would leave a dentist’s chair here?”, enquired Barry.   Easing himself into the chair they were approached by a mystical stranger from a far off land.    The stranger, with a curious Glaswegian accent, produced a bottle.   It was like no other imbibed in their presence. “So, ya’all be huvin a wee snifter at ra’ expense o’ Mr Jäger wull ya noo”, said the stranger sporting a wry smile.  After being encouraged to shoot 6 straight Jägerbomb’s in the dentist chair Barry and Trevor strutted like Bee Gees onto the dance floor.   With moves that Justin Timberlake would later emulate reviving his flagging career they danced.  And oh how they danced.   Girls swooned as their plastic patent shoes reflected stars from the rotating ball, which only that night been purchased for £10.99 at Cowley Road Liddle’s.   Barry was now being chanted with furore to dance faster and faster.   “Baz, Baz, Baaaaazzzza”, the workplace chanted and in unison Trevor became cool and would be forever known as Nevil.   And with dance, and music and another half dozen shots of Jäger the night went on and on.  Another 5 shots and the stranger said, “Come, it’s time”.   But to where they both looked inquiringly.   And as the ravers revelled on like Pagans before a feast, they stepped back to the chair.  “Sit”, the stranger motioned and Nevil did as he was told.   “Not on the floor you great wazzock, get in the chair”, said the stranger with a sighing breath.    And Nevil sat in the chair, and all was comfy and good.   “Do you think I could be excused to the loo?”, asked Baz.   The eyes of the stranger rolled and said “If you must”.   The Jäger was taking Baz to new levels, he was now sailing to Neptune on a magic swan as the music changed from Kylie Minogue to German techno Neo-thrash daftpunk music seeped into every pore of his being.   Hours later he came out the toilet.   His head now shaven into a Mohican, eyebrows removed and profanities written onto his forehead in lipstick he felt ready for anything.   The stranger was indeed pleased.
And Baz joined Nevil in the chair, another 6 shots the stranger started spinning the chair.  Faster and faster, round and round it spun.   The Pagans arrived from the dance floor and with each revolution their voices soared. Then the strangers hand brought the chair to a sudden stop.   Their heads spinning they stumbled onto the dance floor.
They had no idea where they were.   A red spotlight shone from behind Baz.    “I think, well I think that I think that I’m thinking we are on another planet”, said Nevil.   Baz stared and Nevil and Nevil in turn back at Baz.   “Do you know you are carrying a weapon”, said Baz.   “Oh, say’s you”, said Nevil.   “And you think I haven’t noticed that you have changed out of the tank top I bought you for last Christmas’s and now you’re wearing some weird power rangers motorbike helmet thing”, he continued.   Baz couldn’t contain his confusion any longer.  He started making R2D2 noises.  “Why are you doing that?”, enquired Nevil.   “I think you’re supposed to be a Stormtrooper”, Nevil said knowingly.   “Oh, sorry I only know what noise an ewok makes”, and began singing “me tabby yab yab”.   Nevil responded despairingly, “I don’t know what noise a storm trooper makes but it’s not sodden me tabby yab yab”.
And then a voice boomed from the heavens….. “Yer a Snowtrooper”.   Where it came from neither knew.   “Er, is that your boss on the intercom”, said Baz sheepishly to Nevil.
“I’ve seen you squeezing all the secret Santa gifts”, said the voice.   “Did you really feel his presents?” asked Baz.   Just then, a former Oracle DBA contractor came into the room.   “Des!, why are you here?”, they both exclaimed.   And with that Des, drunker than a Cornish pirate on a stag do, fell onto the floor, his bottle of Jägermeister smashed into a thousand bits.
The music stopped, the lights came on.  Everyone was staring at Baz, Nevil and Des.  Then the voice from the heavens boomed again “Pick him up you drunken fools, I think he has broken his legs”.   And Des held aloft his arms reminiscent of Sergeant Elias from Platoon.  His eyes interlocking with theirs. And Baz looked at Nevil knowingly and said……. (wait for it….!)
“I think it’s time we embraced our Des two knees”
15th December (Robert) 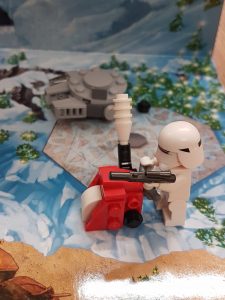 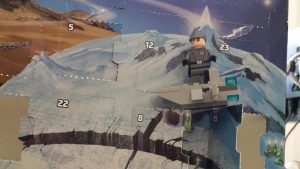 The silver surfer looks down on Galactus’ Christmas bonbon and thinks to himself … is this the wrong franchise? 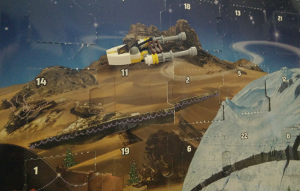 “They sure are prettier down there,” the Y-wing pilot thought to herself as she admired the Christmas lights on the wreckage of the Imperial Star Destroyers. “They’re no fun to meet in battle – but they are a nice background to the Christmas trees!” Fortunate, too, as they were the landmark that showed they were nearly back at base – complete with the Christmas pudding supply. 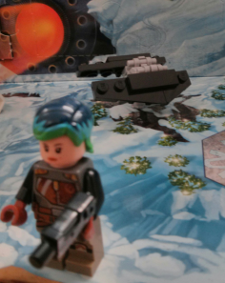 Feeling a bit fuzzy at the edges from the stray blaster cannon shot, Sabine gazes out onto the icy tundra, daydreaming about the coming Christmas family reunion, completely unaware that cousin Kylo has already arrived, as he quietly lands his TIE Silencer onto the ice flow in the near distance behind her. 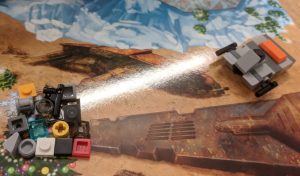 The tank driver was glad to have put enough distance between himself and the Cantina that he could no longer hear the band’s one song, but he blasted it to rubble just to be sure. 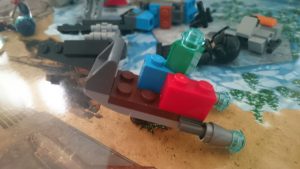 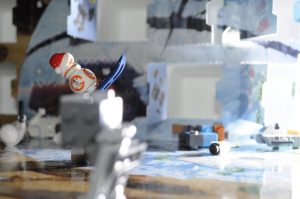 There’s always one who takes things just a bit too far.  The Imperial Walker will not be amused.