Greetings from the unfashionable end of the western spiral arm of our galaxy and welcome to another ‘podvent’ advent calendar. Join us each day as one of our team members opens a door to a new adventure involving Lego, a certain well known sci-fi franchise involving that man-in-black and an artistic license that will most likely be revoked very soon. So, grab your popcorn, sit back and… Don’t Panic! 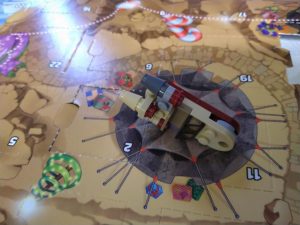 Oh dear. Poor Luke has had one too many ‘temporal cocktails’ at Palais Mauvais on a nearby planet-of-ill-repute. Now he’s trying to work out how to explain mistaking a circus tent for the local space port while suffering with next week’s hangover… 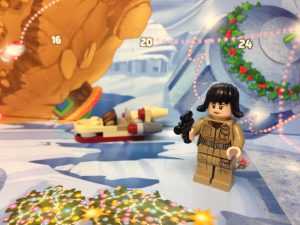 Meanwhile Rose Tico (who knows how to park a Landspeeder) has just left All Bar None, a disreputable hive of scum and villainy on the outskirts of the Casino city, Canto Bight. As she walks she ponders the final words Luke slurred just before he passed out and was thrown into his own speeder. Something about “last orders“?

“Last orders” she questions? But surely he meant the “First Order“, the evil, atheistic state slowly driving the Republic to extinction! And what was the meaning of the strange cone-shaped headgear he had been wearing all night? Surely its bright orange would only attract unwelcome attention? And isn’t soft plastic a very poor choice for protection against blaster fire? And why was his front all covered in vomit?

She is highly perplexed as she walks towards the glow of a circus tent suddenly erupting into fire. 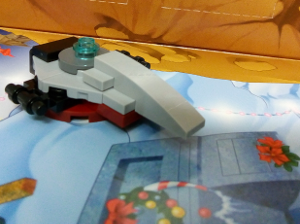 As if shot “out of canon” (did you see what I did there?) the Arrowhead’s skipper is lured by the hypnotic pulsating glow of the lights in the distance. At the helm, Kordi Freemaker wonders if any refresments and snacks will be on offer, or if it’ll be just more of the same peanuts and popcorn…

He’d best be quick though, his payload of presents won’t deliver themselves! 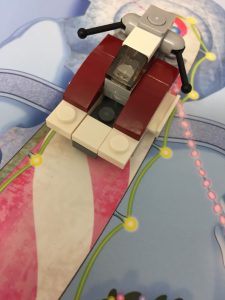 Hello. I’m a Republic Assault Tank. You probably don’t recognise me as I must admit that I don’t seem to get a lot of work these days, but once upon a time I had a couple of big parts you know. Oh yes, I featured in the popular video games Battlefront and Battlefront II back in the day. Kids (and a daresay even a few adults !) drove me around as part of the game. I felt like I really was something back then – a bit of an icon in fact. I had a big mansion up in the Hollywood hills and a nice condo down in Santa Monica. I couldn’t drive out on the street without people recognising me. “Hey, Republic Assault Tank” they’d shout “blown anyone up today !?”. Then things started to get really exciting. My agent told me I was nailed on for a big part in the final film of the Star Wars Prequel Trilogy “Revenge of the Sith” ! This was going to be it – I was going to be A list ! Imagine then my shock when I lost out on the part to the Clone Turbo Tank. I was gutted. “Hey, you’re mentioned in the book of the film” my agent said to try and console me, but who reads books these days ? After that the work dried up. I lost the mansion, the condo, everything. I ended up parked in a backlot in Oakland for years, my parts slowly rusting anyway.  Eventually some die hard Star Wars fans found me, cleaned me up, and got me back on my tracks (if you’ll pardon the pun). Now I just put in the occasionally appearance at the Sci-Fi conventions and let kids ride round on me – just to earn enough to pay the rent really. Before I go I did want to mention though, I’ve got my autobiography coming out – just in time for Xmas. It’s called “Tanks for the Memory”. That was my idea. 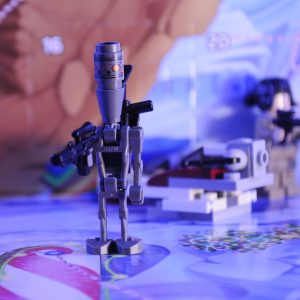 Dawn is just breaking as IG-88 steps out of his fighting tank and looks around.    Seeing the wreckage of Luke’s landspeeder he concludes that Solo can’t be too far away.

Sniffing the air, he turns away from the dawn and heads towards the smell of refined petrochemicals.  It’ll either be a bar or a fueling station.  Either way the odds of finding Solo passed out are better than even. 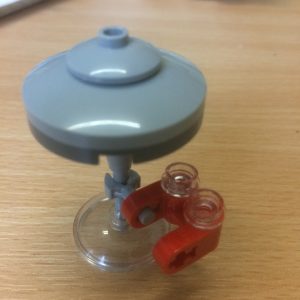 After escaping the Leather Men, Pygar flies Barabarella to the cloud city of Sogo.  Where she must find Dr. Durand Durand who has developed a positronic ray which Earth leaders fear will fall into the wrong hands.  Little does she know that the Black Queen plans to release the evil liquid Matmos to stop Dr. Durand and destroy Sogo.  But do not fear Pygar will save the day and rescue Barabarella and Dr. Durand.  Later when Barbarella asks Pygar why he saved a tyrant, he will reply: “An angel has no memory.” 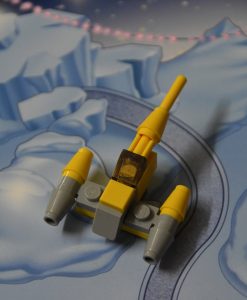 The Bothan star pilot attempted to land on the slippery Permafrost mountain overpass, and skidded into a snow bank. They were beginning to think that they had made a lucky escape, when the stowaway Verpine nibbler xenomorph emerged menacingly from the darkness. Fortunately, our brave Bothan had already uploaded the stolen death star plans to Alliance web storage. Unfortunately, the storage bucket was left open, and security researchers had reported the exhaust port vulnerability via the Empire’s bug bounty program. “Many Bothans died to bring us this information” said Mon Mothma, tragically unaware of the Empire’s automated patching schedule. 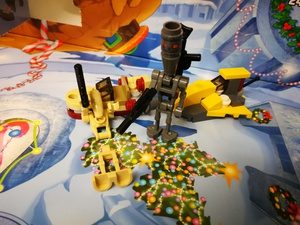 IG-88 is still searching for Solo, hearing A battle droids screech in sparks of pain. IG-88 approaches demanding an explanation, the droid informs there is no recollection of these events due to some “memory corruption”. IG-88 curious of the atrocities of the previous night runs a data recovery program on the droid to find the only recoverable information is “Shots”. 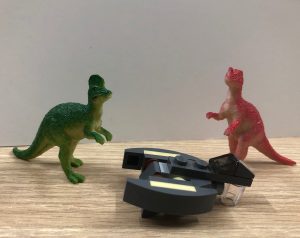 General Grievous awoke to a loud noise coming from outside of Soulless One. Yesterday evening was the Droid Army Xmas party and he wasn’t entirely sure how he had made it home. After a couple of paracetamol he realised the growling noise was getting louder, so, probably wasn’t just a hangover. He was going to have to get out of bed to investigate… 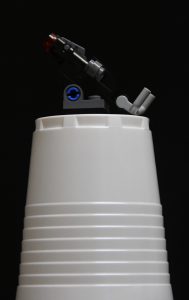 During the last election the “cloud means cloud” party had entered into a confidence-and-supply arrangement with the government, and referring to “other people’s computers” in any other terms was now a thought crime. On the stroke of midnight, the announcement laser on top of the Ministry of Truth arced upwards and began spewing photons. In this post-822 era, all communications were mandated to use high energy sky-lasers for message control. All across the land, workers stepped away from their productivity tracking cameras to look skyward at the glowing letters that read, “change freeze”. 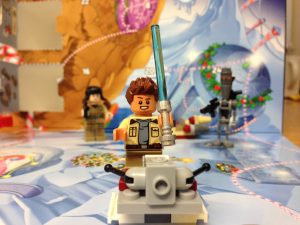 A long, long time ago in an overexploited galaxy, Rowan Freemaker, a really pointless and annoying kid, pilots a Republic Fighter Tank into camera shot. In the distance Rose Tico and an anonymous-looking robot bounty hunter try to look interested, but do a poor job as it’s well past lunchtime and the queue for baguettes is already over fifteen people.

Meanwhile, onlookers try to work out who the kid even is. I mean, he wasn’t in any of the films. Oh no! Turns out George Lucas, despite now owning most of California, obviously still hasn’t got enough money and has decided to prostitute his vanishingly small principles even further by selling a pointless animated series to kids!

I blame that Jar Jar Binks. Everything went downhill from that point. Makes me thoroughly sick!

“It’s like well wicked init”, said Anakin Skywalker much to the continence of the refined Rowan Freemaker.  “Innut bruva, I has totally pimped ma’ Jedi Starfighter wiv cannons n’ stuff from de’ Dak’ side to da West Side.  Since a’ nailed the hyperdrive for ma Julie Amidala I is so da Jedi Massiv’ wit ma posse”.     Rowan sighed recounting his preference from whence young Jedi’s possessed Scottish lilts. 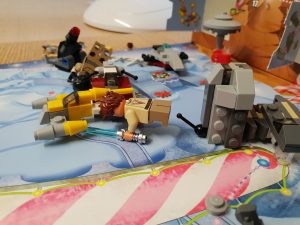 “We shall get the child to talk” said Vader as the Imperial probe droid moved closer to Rowan. Rowan thought to himself “I always thought that they were for probing outer space not my inner space!” 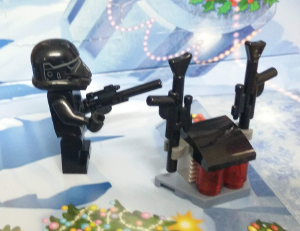 Excellent!  The Death Trooper was pleased to find a weapons rack with two new guns.  On further inspection, he realised that they weren’t quite as useful as they seemed, as the red bricks indicated that they weren’t charged.  Fortunately, the solution was simple – when setting up for Christmas, someone had unplugged it to plug in the Christmas lights.  That would only take a moment to sort. 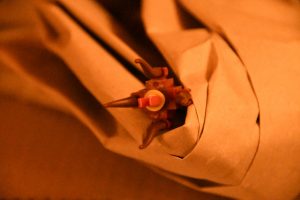 The slithering moist tongue licked greedily around, hungry for any input that it could gather. Some rebel factions believed that they could confound the tongue, by completing missions that were actually passed to others, and resolving all alien encounters as “first contact”. “Garbage in, garbage out” said Boba Fett, emptying his burning dumpster into the hungry maw. Luke however knew that the vision of the wise Jedi Council would not be obscured by mere blast shields. 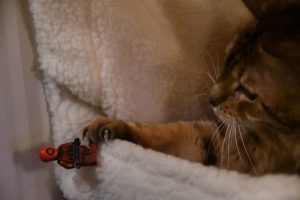 The Guavian tried to negotiate with the rebels via Bala-Tik, only to find that empire_opt_out_member inexplicably meant empire_opt_in_member. While the rebellion immediately blamed a translation error, it turned out not to be Bala-Tik on this occasion. Nevertheless, the Guavian was eaten, and all future field naming will be performed by the committee for databa~1 nomenc~1. 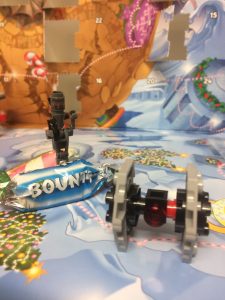 Having completed his delivery mission, the First Order TIE Fighter prepared to depart. IG-88 gave a cheery wave, pleased with his bounty. 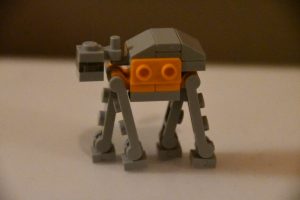 After the Ewoks took control, they were surprised to learn that the empire had replaced the moderately reliable “Windows for walkers” with the slightly untested “Apple for AT-ATs”. Our furry friends were glad that the empire had not discovered free software, as “Debian for deathstars” would be a frightening thing. 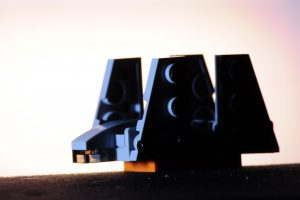 On a distant desert world the crew of the Zeta class cargo shuttle “Rudolf One” go through the pre-flight.  It’s dawn, and while the chill of the previous night hangs on, the sky is already burning their eyes.  The pressure is on.  If this launch fails as the others did, the brave souls on the snow planet will not get their presents. 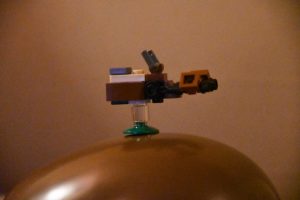 The battle soldier production unit sat back happily, having achieved a decisive victory in the clone resource wars. “All your base are belong to us” it chuckled, while spawning more clones. Soon the galactic analysis will be complete, and Mos Eisley will be the new hive center. “Don’t look at my transparent tube”, it warned, “That 804 unit is off-limits”. 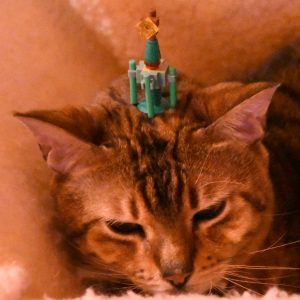 The moisture vaporator was working at full capacity, condensing the potent breath of the fearsome Womp rat. Aunt Beru wrinkled her nose as she passed a warm glass of the fresh condensate to Luke. “This is undrinkable!” exclaimed Luke, “It stinks of rotten meat!”. “Good enough” said Snoke. 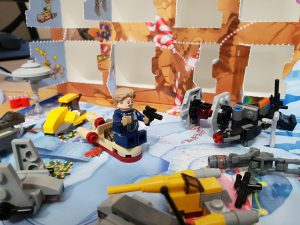 General Antoc Merrick rides in on the bonnet of the speeder yelling “Hey guys let’s get the party started!”. Everyone looks at each other thinking “Who the hell is this?” 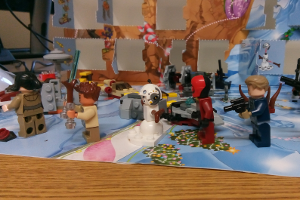 With the party well underway, nobody noticed Rowan Freemaker making off with the rebel snowpilot’s spare twig arm. With Yakety Sax playing in the background the chase ensued to recover the stolen branch, only to joined by everyone else mistaking it for a conga line — from a party far far away…