What is OxReach and why is it important?

OxReach is the official crowdfunding platform dedicated to philanthropic projects from the University of Oxford. OxReach allows members of the University to raise philanthropic funds for specific University related projects with tangible social impact. It is designed as an enabling tool for this community of staff, students and academics to translate the ideas they are passionate about and turn them into reality.

Over the past year, OxReach has hosted two projects which both happen to feature Africa. The first is focussed on saving newborn lives and the second on treating clubfoot in children. Together these projects raised a total of £146,223. Crowdfunding raised awareness of the types of impactful projects within the University and facilitated  engagement outside of Oxford.  It will enable the project creators to apply their expertise to make a difference to the lives of children in Africa. OxReach is not just limited to life-changing interventions but rather for any philanthropic project that could have a tangible social benefit. If in doubt please give the OxReach team a shout!

Why did we try crowdfunding?

In 2013, Professor Mike English contacted Oxford University Innovation with a brilliant idea, but no funds to pursue it.

Every year, 470,000 African babies die on the day they are born, and this figure increases to 1 million deaths within the first 28 days.

Mike had developed ETAT+ in 2006 to tackle this problem by providing healthcare workers with face-to-face training to identify and manage the most common threats to newborn and child survival in East Africa. ETAT+ ensures sick newborns and children from even the poorest families receive high quality, effective care wherever they seek medical attention and was developed specifically for implementing in facility-based care in East Africa. Mike’s comprehensive and proven intervention has trained over 5000 health-care workers and 3000 students in Kenya, Uganda, Rwanda, Tanzania, Zambia, Zimbabwe, Malawi, and most recently Myanmar. It has benefited hundreds of thousands of children in the 10 y 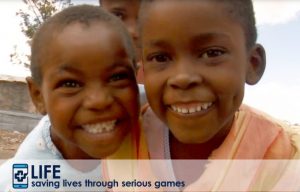 ears since the programme started. The problem is, it wasn’t enough.

In Africa the number of smartphone connections doubled in two years to reach 226 million in 2016, and now most healthcare workers have one. Mike wanted to reach all of these healthcare workers using their smartphones, so he brought together a team to build a digital platform for ETAT+ based on the concept of serious gaming. His team named it LIFE – Life-saving Instruction For Emergencies, but traditional funding sources failed to support the idea to build the prototype.

This is when Oxford University Innovation turned to crowdfunding and hence OxReach was born. OxReach is designed for projects that fall between the silos of research and commercial funding, providing a formal but easy to use infrastructure for gathering funds.

Crowdfunding platforms like Kickstarter and Indigeogo have high user fees, unpalatable legal terms for Universities and low visibility due to competition from other campaigns on the sites. Therefore, we decided to create a crowdfunding platform dedicated exclusively to the University of Oxford.

We chose to work with the crowdfunding experts at Hubbub to create OxReach. Hubbub has extensive experience of working with Universities, including York and Southampton, to build branded platforms for crowdfunding of their needs. After a highly collaborative effort with the University of Oxford Development Office, Gift Registry, and Finance, and with funding from the IT Innovation Challenges scheme, we built OxReach.

Importantly, donors are 5 times more likely to give to a branded platform than to a generic giving page on third party websites such as Kickstarter. A branded platform was also attractive as we could leverage the University of Oxford’s brand dedicated to campaigns sourced entirely from members of the University without additional platform fees and on legal terms favourable for Universities. The OxReach team gained first-hand experience of crowdfunding by running the LIFE campaign.  Project creators benefit from the crowdfunding advice, knowledge and support which the OxReach team offer to help future fundraisers.

How does it work?

OxReach is a rewards based crowdfunding platform, which enables project leaders to harness the power of social media and secure small sums of money, from a large number of backers, in return for a small reward or token of thanks. Initially the money is pledged, only converting to a donation once the minimum fundraising target is reached. It’s an all or nothing approach in that a project must achieve its minimum fundraising target by its funding deadline or no funds will change hands.

Part of the appeal of OxReach is that sponsors get to engage with projects and see where their money is going whilst project owners have the funds to deliver their projects. The relationship between project owners and project sponsors is therefore one built on trust. And so, if you decide to crowdfund on OxReach it is important you commit from the start of your fundraise up until project completion when funds have been secured, rewards delivered and objectives accomplished.

What are the benefits? 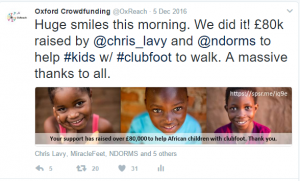 The LIFE project has had phenomenal success in the last year. The crowdfunding donations were matched by the Wellcome Trust ISSF, instantly doubling the funds available to create the smartphone serious game.

The team then went to the Saving Lives at Birth challenge in the US, which is funded by Bill and Melinda Gates Foundation, Grand Challenges Canada, the UK Department for International Development (DFID), USAID, Norad and KOICA. They won around $118,000 to help build a VR version and to beta test the smartphone game with nurses in Oxford and Kenya. The beta testing is going well!

During the crowdfunding campaign, HTC pledged £20,000 and have further supported the team by donating Vive headsets, which are being used to test the VR version of the game. HTC also hosted LIFE at the Consumer Electronics Show (CES) 2017 in January, where they showcased their first demo on the ENGAGE platform from Immersive VR Education. Check out the video with Dr Chris Paton demoing LIFE on the HTC Vive https://oxlifeproject.org/blog/

What have we learned?

The OxReach team at Oxford University Innovation learnt a huge amount about crowdfunding and fundraising from running the LIFE campaign in March 2016. We now want to use our experience to help others run successful campaigns on OxReach.

How can you get involved?

Check us out on twitter at @OxReach and look out for our next campaigns in June. You can help them out by sharing their message with your friends and family on Facebook, twitter and other social media accounts.

If you are interested in crowdfunding for a project with tangible social impact, get in touch with us at oxreach@innovation.ox.ac.uk