Posted on November 2, 2017 by Stephen Burholt

Colleagues from Academic IT attended the launch event of the VR-AR Hub at the Cohen Quadrangle, Exeter College on 26 October 2017. The VR-AR Hub is a student project winner of the IT Innovation Challenge award 2017 and is designed to bring together people, knowledge and resources related to VR and AR technologies.

The event was presented by the team of Gustavo Quino, Maria Lissner, Mattia Montanari and Richard Smith. An enthusiastic audience of more than 30 people listened to some fascinating VR case studies, and also had the opportunity to try out the latest VR technology. Further meetings and events are planned.

For more information see the project webpages. For an introduction to VR and AR at the University see the Digital Education Strategy webpages. 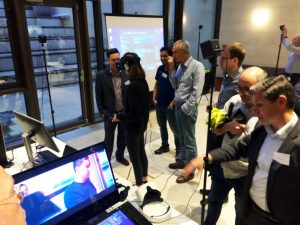 The audience try out the VR technology. 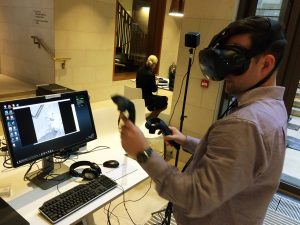 Trying out the VR controllers.